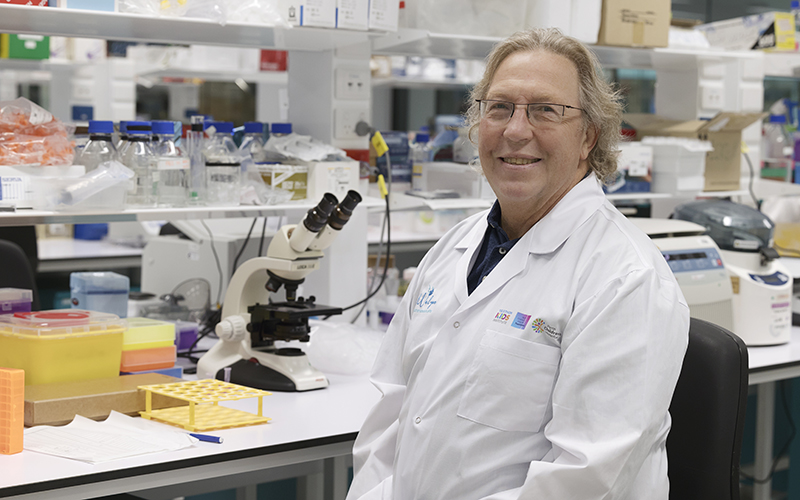 A bold respiratory research project will investigate whether wearable devices could drastically change clinical care for children living with chronic diseases such as cystic fibrosis.

Professor Stephen Stick – Director of the Wal-yan Respiratory Research Centre, a powerhouse partnership between Telethon Kids, Perth Children’s Hospital and the Perth Children’s Hospital Foundation – will use part of his recently secured $1.9 million Investigator Grant from the National Health and Medical Research Council to find out whether wearable devices can detect health changes, so children with cystic fibrosis (CF) can receive prompt treatment when needed.

Professor Stick, who is also a respiratory clinician at Perth Children’s Hospital, said the current model of care for children living with CF required in-hospital check-ups every three months.

“It’s important to regularly monitor the health of children living with CF, specifically checking their lungs for things including infections, because the sooner inflammation or infection is found, the sooner we can treat it,” Professor Stick said.

“The downside with these check-ups is they take time and children often miss out on school – when in most cases the children are predominantly healthy.”

Professor Stick said that thanks to research, new medications and treatment options coming onto the market meant children living with CF would live longer and relatively healthier lifestyles.

With this change in treatment, he said the current check-up model needed reassessing and he wanted to investigate whether technology such as wearable devices or smartwatch apps could play a role, similar to how constant glucose monitoring devices help children with Type 1 diabetes.

“For children with Type 1 diabetes who use the wearable monitoring devices, they are more informed to be able to regulate their blood sugar levels,” Professor Stick said. “It would be great if we could do something similar for children with CF, so they can better understand what is happening with their health.

“In most cases, young children with CF are predominantly healthy. If we could utilise technology to more regularly give a snapshot of how the child is doing and keep them healthy, hopefully we can keep them out of hospital.”

The wearable devices could also help with the stress and mental health impact of living with cystic fibrosis for both the child and their family.

“These regular appointments can cause anxiety for the family – they don’t really know if the next appointment will bring bad news,” Professor Stick said.

“Also, a lot can happen in the gaps between scheduled appointments. Subtle changes in children's health, if undetected and untreated, can eventually result in significant deteriorations and sometimes admission to hospital.

“Wearable technology has the potential to help children and their families feel more informed and empowered about their health, and ultimately allow them more of an opportunity to just be kids.”